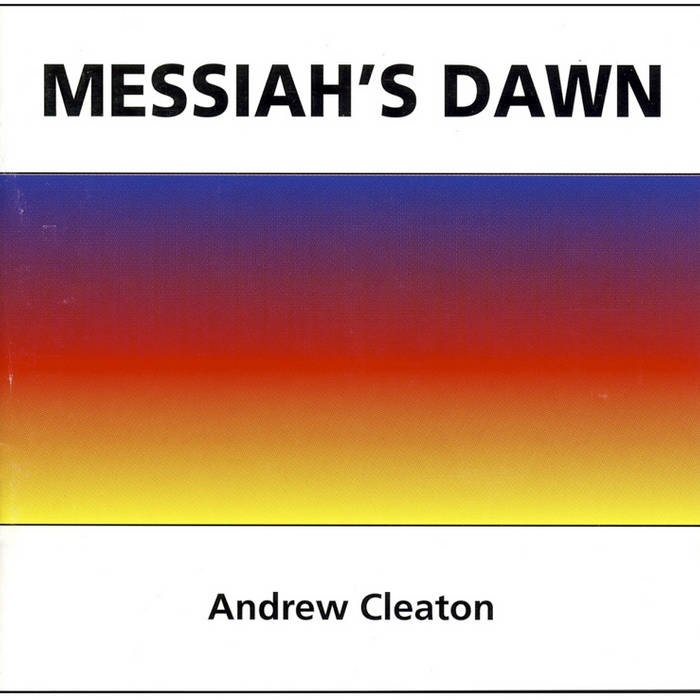 Messiah's Dawn is a re-telling of the traditional Christmas story in contemporary songs, instrumentals and narration. Based on a few pieces first developed as part of a Carol Service for Christ Church, Upper Armley, Leeds, in 1989, it received its full premier in 1999 at St George's Church, Leeds. The following year saw the original band and singers come together to record the CD version.

Some 12 years later, the original album recording is presented for digital download through Bandcamp.

"Andrew Cleaton ... has made a brave leap into the world of musicals by writing a Christmas musical. It's already been performed at St George's Church, Leeds, while an advance copy of this CD has had airplay on UCB. Musically Andrew admits to being influenced by Peter Gabriel and Adrian Snell and there are indeed elements of both of them in the classically tinged pop rock while having the always reliable Simon Goodall to provide many of the lead vocals (like on the elegant "For Unto U") makes for a nicely mellow sound. Also, the narrations of Scripture, so often a pitfall in musicals, are very effective. An excellent production deserving of the widest possible circulation around the churches."

Special thanks to my sister, Sheena and to Jane Morris for such inspiring words; to Phil & Angie Wright for invaluable administrative support; to Goldmime Theatre Company for making the live show so memorable; to all the church family at St George's, Leeds, for love encouragement and support; to Jon Blamire for dedication above and beyond the call of duty and to my family - for being there!

And of the increase of His government and peace
There shall be no end.
Track Name: Luke 1: 26-27
"In the sixth month God sent the angel Gabriel to Nazareth, a town in Galilee, to a virgin pledged to be married to a man named Joseph, a descendent of David. The virgin's name was Mary."
Track Name: My Soul Magnifies the Lord
My soul magnifies the Lord
My spirit rejoices in God my Saviour.
For He has done mighty things for me,
And holy is His name.

He has remembered His humble servant,
From now all generations will call me blessed.
His mercy extends to those who fear Him,
In every generation.

My soul magnifies the Lord...

His arm has performed many deeds of great might,
He has scattered abroad the men of pride.
He has brought down the mighty rulers,
And lifted up the humble.

My soul magnifies the Lord...

He has provided good things for the hungry,
But the rich have been sent empty away.
He has helped his servant Israel,
His faithfulness goes on.

My soul magnifies the Lord...
Track Name: The Journey
Music: Andrew Cleaton
Track Name: The Greatest Gift
A virgin gave birth to a son, two thousand years ago.
A turning point in history, but no one seemed to know.
The world went rushing by, oblivious to the cry
Of one so tiny, so helpless yet so great.

A king born in a stable, doesn't happen every day.
And royalty is never found in dirty rags and hay.
But the King of glory came, in poverty and shame,
To live and love, to suffer and to die.

God became a man, oh Christmas mystery!
The Saviour dwells with us, are we so blind we cannot see?
The frailty of humanity contains such perfect deity.
God's son - the greatest gift of all...
Track Name: Messiah's Dawn
Love with no condition
Whispered through the air,
As travellers looked with joy,
To see the baby there.
And through the years of waiting awe
Israel's hope is born.
A covenant restored once more,
On this Messiah's Dawn.

Angels fold their wings
Around a royal town,
Whilst in a manger lies
A king without a crown.
A star shines through the night,
And gazes on the place
Where beasts and men all gather round
A mother's heavenly grace.

What infant clothes are these,
Borrowed from a grave?
What future lies in wait,
For the gift God freely gave?
No prize shall mark his years,
But only twisted thorns.
And so for us today this child,
Our saviour Christ is born.
Track Name: Glory To God
Another sleepless night.
I'm getting tired of counting sheep.
The troubles of the day invade my mind.
I find it hard to sleep.

Another restless hour,
What did the prophets mean?
When will the dawn of your new day appear?
When will your truth be seen?

Suddenly the silence shatters,
Night is turned to day.
Darkness dispelled, be not afraid!
A new day dawns,
Hope is born today.

Glory to God in the highest,
Peace on the earth, good will to all men.

Suddenly the silence shatters,
Night is turned to day.
Darkness dispelled, be not afraid!
A new day dawns,
Hope is born today.

Shepherds come quickly,
Kneel before your King in worship.
Angels from heaven
Sing His glory on high!

Mary now love Him,
Hold within your heart this treasure.
Wise men from far lands
Praise the Kings of Kings!

My soul now welcome,
Let His light shine in the darkness.
All lands shall worship
Christ the Lord of all!

Shout for joy - Christ is born!
Love come down from heaven.
Hope restored, bright new dawn;
Jesus, child of Bethlehem.
Track Name: Mary's Song
All of these things, I keep in my heart.
Time to reflect, time to do my part.
To be yours forever, for all of of my days.
I will worship and serve you in love and in praise.

Words can't explain, words just cannot describe.
As you lie in my arms, so warm at my side.
I hold you so tender, can you really be mine?
To nurture forever, so small, so divine.

Silent in wonder they came to your stall,
Stood in your presence then knelt on the floor.
In total surrender, they saw your star
And heard angels sing as they travelled so far.

Now as I cradle your promise fulfilled,
My task overwhelms me, but yet I am stilled
By the peace when I know this is part of your plan,
My child, my creator will dwell as a man.
Track Name: Celebrate 2000 Years
Celebrate two thousand years,
Centuries full of hopes and fears.
Worship Christ, the living one,
Rejoice and tell what He has done.

Jesus paid for earthly crime,
Broke through all the walls of time.
Sins are cleared from guilty past
By Jesus, firstborn and the last.

Jew or Gentile, slave or free,
All will come to know and see,
Jesus Christ, He reigns as King.
Let all the world in union sing.

Bandcamp Daily  your guide to the world of Bandcamp

Guests include Kassa Overall and Muriel Grossman, plus an LP of the week by Van Hunt.